The “Sins” of Our Fathers: How Trauma is Passed Down Through Generations

The “Sins” of Our Fathers: How Trauma is Passed Down Through Generations 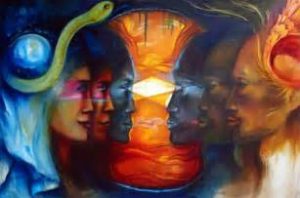 The idea that traits, illnesses, and behaviors are passed down through generations has been a long standing topic of study and debate in the academic and philosophical worlds.  If traits, behaviors, illnesses, and tendencies are passed down through genetics- how can we really own who we are as people?  The questions that you could ask yourself about the meaning of these things being passed down are numerous.  Today, I want to share with you the different ways that psychological trauma can be passed down  through behavioral and genetic components while offering hope through a case example (all names and details have been changed to protect identity).

The great debate of nature vs nurture becomes ever apparent in the understanding of the effects of trauma from generations before.  There’s no easy answer, but we can all agree that both nature (genetics) and (nurture) play a pivotal role in transgenerational trauma.  I want to talk about a few ways that trauma is behaviorally passed down (along with any parental traits) by focusing on a few theories that contribute to the idea: Social Learning Theory and Attachment Theory.

Albert Bandura is a major contributor to our understanding of Social Learning Theory- and the best thing I can do to help you understand it clearly is to link to a a video on one of his most famous studies:

As you can see in the video, the theory supports the idea that children will do what they see.  Since Bandura’s famous study, there is a lot of debate on the differences between seeing an adult in real life act out what they have seen vs what seeing adults on TV or in video games- but that’s a discussion for another day.

Now, let’s take that concept and apply it to Trauma.

Adults with a history of trauma have certain behaviors, symptoms, and interactions that clearly differ from those who may not have that same history.  For example, someone with a trauma history may stay up very late at night because of insomnia.  They cower when someone raises their hand (even when not to hit).  People with sexual trauma histories may be more crass, and educate their children differently about sex.  Survivors of trauma may also be highly protective of their children while others may be very aloof.

Let’s take an example of a woman who has survived sexual trauma growing up.  It’s time for her child’s first birthday part sleep over.  She may refuse to let her child go to the party.  She may call her child several times during the party to assure that they are ok.  Maybe, she will come early to pick the child up.  In this situation what does the child learn?  We can project that the child will be wary of new places and experiences, less likely to be adventurous or spontaneous, and might avoid friendships in order to avoid the anxiety of being invited to go somewhere.  The child learns this all with out the mother even mentioning her history of sexual trauma.  This is a contributing factor to trauma transmission, but not the only factor.  Another idea behind the behavioral transmission of trauma is rooted in Attachment Theory.

Attachment theory is based on the idea that our interactions between ourselves and our primary caregivers in early childhood greatly affects our interactions in our relationships as adults.  You’ll note that there are a few types of attachments that aren’t “healthy”.  These other attachment styles happen more often with parents who have experienced trauma in their lives.  The video also doesn’t mention the 4th attachment style- the disorganized attachment- which I will add a video about here:

Now, let’s talk about the genetic factors in trauma transmission…

In addition to the behavioral/environmental aspects of trauma transmission, recent studies are suggesting that there is an actual genetic transmission of trauma.

It means that having a traumatic experiences literally changes our DNA.  That’s right… our DNA changes.  Not only does our DNA change, but this genetic change/mutation is passed down for up to 3 generations.  If you are interested in more of the science-y information- check out this article by Nugent, Amstadter, and Koenen, 2008.

This idea that PTSD is a genetic disorder brings a whole new level to our thinking of behavior- especially in the world of therapy.  So- what does that mean?  What do I do if my parent or grandparents have struggled through a major trauma before I was born?

My biased answer is- CHECK INTO THERAPY with a therapist who understands trans-generational trauma transmission.  Here’s why:

A male in his 20’s checks into therapy complaining of having a long string of difficult relationships.  He reports that everything goes well in the first 6 months of a relationship and then he begins to feel trapped.  He reports that he is often the victim of emotional abuse which results in him staying home and feeling captive to his partners.

As it turns out, his family had a history of being in captivity during WWII and suffering immeasurable amounts of abuse.  After processing the great affects that the tragedy had on his grandparents- it became clearer as to why his parents had certain behaviors.  He became aware of how generational trauma was playing a major role in his own life.

So what did the therapist do to unlock the trauma?  Luckily trauma that has been passed down can be addressed in therapy.  It’s done in a very similar way as if the trauma had happened to you.  Making connections and becoming aware of the family experience and meaning of trauma, in addition to the way it has affected the family is integral in repairing patterns of behavior that are rooted in generational trauma.

Transgenerational trauma- just another reason why everyone benefits from therapy!

Kristin Martinez is a Licensed Marriage and Family Therapist who specializes in trauma survivors, transgenerational trauma, and micro-trauma and their effects on people’s behavior patterns. Kristin is a trauma survivor and is passionate about reducing the stigma of getting help through therapy.

Healing from Betrayal Trauma with Therapy

What is Betrayal Trauma? Betrayal trauma is a type of psychological trauma that occurs when an individual experiences a breach of trust from someone they depend on or have a close relationship with. This type of trauma can be caused by infidelity in a romantic...

Talking to Your Teen About Going to Therapy

Talking to Your Teen About Going to Therapy Being a teenager is a difficult time.  Well, being alive is a continuous adventure of change, overcoming obstacles and celebrating victories, that’s a given.  However, adolescence is the rite of passage between childhood and...